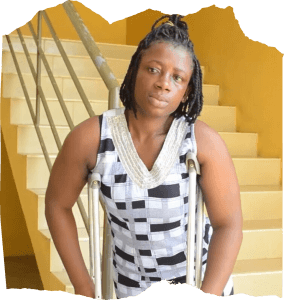 IN HER WORDS – DINA APPERKEY

At 8 years, I discovered that I could no longer walk for strange reasons. Some people said it was due to spiritual causes, while others said it was a medical problem. I could not go to hospital because there was no money. I was crawling on all fours and suffered for a long time. The Chief of my hometown Kade, in the Eastern Region, was a member of the Church of Christ, sent me to church to meet with some missionaries of the church who later supported me financially. It was because of their financial support that I was then able to undergo surgery on three separate occasions. Only years later was I able to walk with crutches.

Because of my condition, I did not have smooth education although I was very much determined to continue school. I managed to enroll in Senior High School and later gained admission into a College of Education to train as a Teacher . I later dropped out due to financial difficulties.

It was at my home church in Kade that I heard about Heritage Christian College, and I applied because it is a Christian University. I love the university because it has helped me to grow spiritually and have found a loving community of students and faculty. However, I still struggle to pay my fees and I have to go around to different churches to beg for money for tuition and upkeep because none of my family members is in the position to support me. I am now in my third year at Heritage Christian College.

After I complete my degree at HCC, I would like to set up an NGO to support persons with disabilities. Through my church, I was introduced to HCC, and it is this same chance that I would love to give back to others with similar disabilities to mine.

By joining our Genesis Community of monthly donors, you can support students like Andros Rahaman Jimoh by making a monthly commitment towards ‘scholarships’. Learn more here…