A Q-and-A with Dan McVey, friend to the Heritage Christian College family and an instrumental figure in the formation and early years of Heritage Bible Institute.

As one source who is acquainted with him has observed, McVey has been involved in cross-cultural life, studies, and connections for more than 35 years, including some 21 years spent living in Ghana—where McVey still spends some time each year. His fields of study and experience are Inter-Religious Dialogue, World Religions, Islamic and Christian Relations, African Cultures, and Christianity’s Emerging Trends. Besides his work in the Department of History and Global Studies as well as the College of Biblical Studies (both at Abilene Christian University), McVey teaches university students in several African nations, as well as in China and the United Kingdom. He participates in farming and rural land development in the Abilene area and has another farm property in Ghana, the latter producing cocoa. McVey received his M.A. in Muslim Studies from Columbia International University in 2003, and earlier received his B.A. in Biblical Text from Freed-Hardeman University (in 1979). He is the author of a novel, God Spares Not the Branches, which draws from McVey’s own experiences in Ghana and West Africa.

Recently, we sat down with McVey in his home city of Abilene, Texas, for a conversation on the beginnings of Heritage Bible Institute and on his impressions of the church experience in Ghana, as it has played out through not just HBI but Heritage Christian College as well. (Where the tag “HCCF” appears, the speaker is the interviewer from Heritage Christian College Foundation.)

HCCF: We know that you were involved very early in the development of HBI. What can you say about the part that HBI played in the formation of HCC?

DAN McVEY: My connections with Heritage go back to the early ’80s, when we first moved to Ghana. There was a little group of students that had been gathered together in Accra to form a school that at first was called NBI. The National Bible Institute. My purpose for going was not really to work with that school. But when we got there, and got involved in various church projects, the local brethren in Accra asked me to help with the school—to help teach and do other things. So I said okay, I’d be glad to help out if you want me to.

So it ended up becoming very much a center of much of the work in Ghana that I did. Through extension programs, we had eight or nine different programs running at once. The name changed down through the years a time or two, because the government came along and said they didn’t want anything that’s non-governmental using the word ‘National.’ They wanted certain words kept only for government institutions. So we had to change the name. I think we changed it to Nationwide Bible Institute [at first] because we wanted to keep the “NBI” because of the logo and everything we had. [In time, NBI would evolve into HBI.]

Eventually I moved away from Accra to northern Ghana. I had been the director of the school for, oh, 16 or 17 years. When I moved away to northern Ghana, it was so far away and I was wanting to phase out of that anyway, so that’s when Sam [Samuel Twumasi-Ankrah] took over. So I continued working with the school, then just as a teacher, going down to Accra to teach from time to time, doing some of the extension work with some of the other NBI leaders. So historically that’s been my connection and then we left Ghana to come here to Abilene Christian University in 2003, 2004, somewhere along there.

Since then, I’ve gone back to teach from time to time, counseling and advising, walking alongside, and encouraging, Sam and Evans [Lartey] and some of the other guys that are there. They were all my students, almost all the senior Heritage leadership today. My wife always said we all grew up together. Because I was 24 when we first went to Ghana and Sam and I and Evans were all the same age. Even though they were my students, we were all the same age. Then we got them connected with ACU, they came here to get their Masters degrees. So I’ve just been in that mix and we’ve been back here for several years now.

I go back to Ghana almost every year. I don’t teach at Heritage every time because of the scheduling—it just depends on what their schedules are. Now that they have some new programs running, it’s a little difficult for short term classes to work out. But I’ve been working with a couple of projects out of ACU where we’ve been taking students over in the summers. And we base sometimes over at Heritage with ACU students—helping [advance] ACU’s programs that they’re running there. Sometimes just advising, problem solving, things like that.

I’m not an official there—I don’t hold any official position per se. I’m just ‘historically’ connected—a friend to everybody. 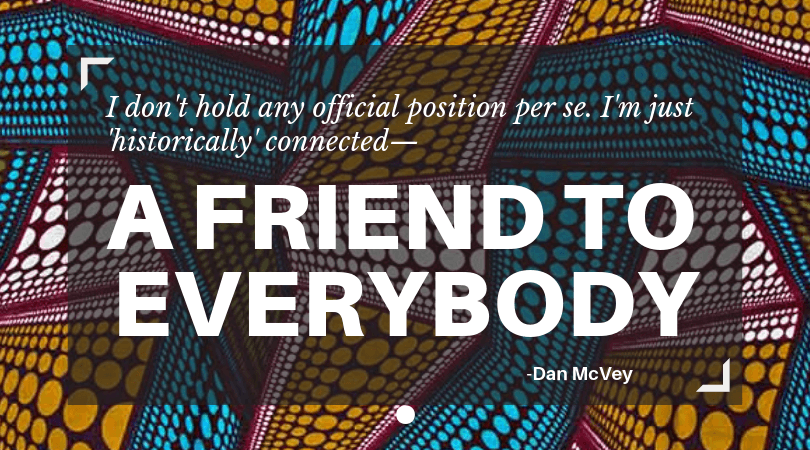 HCCF: What was it like for the Ghanaians to transition from a simple Bible school, or ‘preacher’ school, to an accredited institution of higher learning?

McVEY: We got a start on the accreditation process back in the ’90s a little bit, when the government started being open to non-government universities. For a long time it was only government institutions that could be accredited. We kind of looked into it but it was [then] beyond what we could do. NBI was a very simple church-based program. We didn’t own facilities—we used a church building’s facilities. We had small groups of students, small cohorts of anywhere from maybe a dozen to maybe 18 full-time students.

Everything was run on a shoestring, and very simply, as we were trying to avoid dependency on foreign bureaucracy. So we started trying to incorporate more and more Ghanaian church leaders who were educationists, professionals, to try to keep ramping up the whole thing. Yet we tried not to lose sight of the school being a tool of training and serving the church. And of course it was not the only school like that in Ghana. There was Ghana Bible College, which was a bit older, a bit more institutional in their approach. And then some other schools that popped up through the years in the western region, in different places.

But the Christian college aspect of it, the emphasis on business, just ramps everything up to a higher academic level. And of course they are affiliated with the Kwame Nkrumah University of Science and Technology (KNUST) in Kumasi, which is a government university. That’s part of the accreditation process. 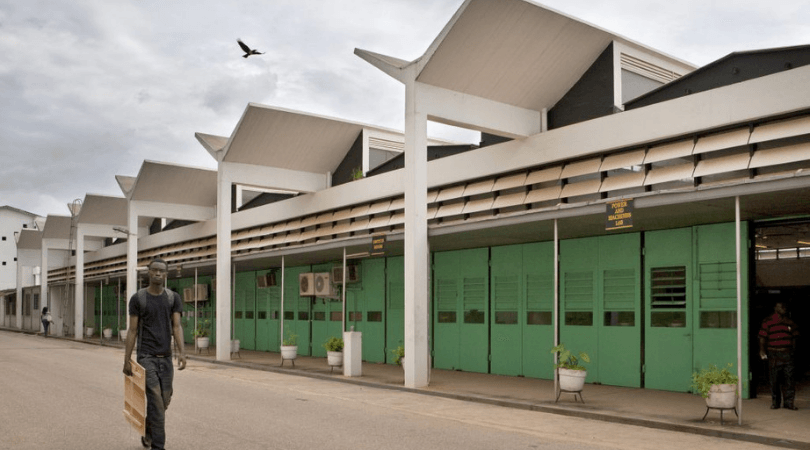 Kwame Nkrumah University of Science and Technology (KNUST) in Kumasi

So now we are looking at the school as a Christian college, and they’re looking at maybe a nursing school. And they [already] deal in IT and business. So it’s a broader, more practical, aspect, a more practical approach, to how to build up the society, how to provide employable skills for students, to get more students and broaden the student base and appeal. While at the same time they are serving the community’s development, especially [with their] very entrepreneurial approach. Heritage is pretty unique in that. Very, very unique. 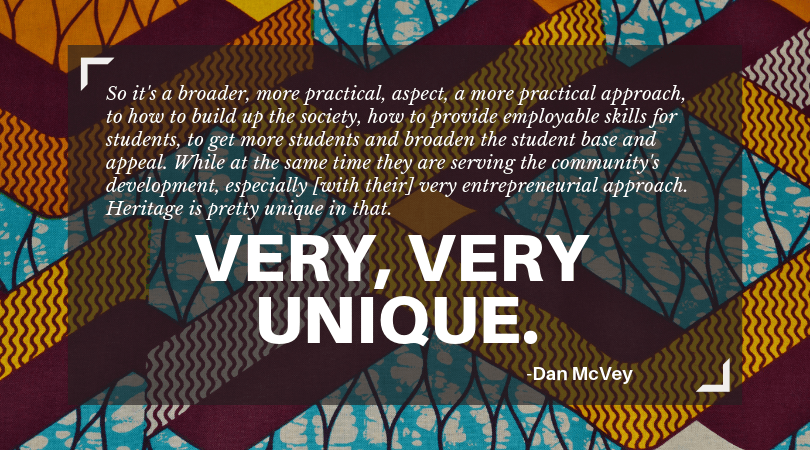 The way I understand it, we have the Christian college, which is developing academically, socially, more in line with government standards of education. And then we have HBI, which is still geared towards the church of Christ, towards the need for ministerial training, church leadership, and pioneering in that.

And as the church has grown and expanded in Ghana over the decades, with the church of Christ being what we are in our DNA, there have been controversies. They [controversies] were there before I ever went. They were there before NBI was ever established. But through the decades there have been some differences, and so you have schools that represent different schools of thought. Compared to the United States, it’s been very minimal. Ghanaians have a great way of getting along, even if they don’t agree on things. Whereas here we fight and split and separate and divide and excommunicate. They don’t do that really. They’ll recognize differences and respect each other and just go on.

HCCF: Can you say something about being a farmer in Ghana?

McVey: Well, we still have the farm. Our partner there, Christian Nsoah—he and I worked in ministry together for many years. He was the head of Project Timothy for Heritage for many years. Christian is older now and is pretty much retired. So, the farm—we had this cocoa farm together these last 12 years or so, while he’s been kind of retired, but it was something we had always wanted to do in Ghana. So, when we would go these last ten years or so, we’d spend three, four, five months a year on the farm. Sometimes working with Heritage a little bit, sometimes not. But always talking with all the Heritage folks. A matter of fact, Sam Twumasi has some land right by our farm too. But we’re leasing the farm out right now to someone else. But it’s going well. We grow cocoa, so eat chocolate. [Laughter.]

HCCF: Anything special we can share about your background? Where were you raised?

HCCF: Did you go to school at ACU?

McVEY: No, actually I went to Freed-Hardeman. In Tennessee. And then further education primarily in what was called the Zwemer Institute, which is at Colombia International University in South Carolina.

HCCF: Are you acquainted with Deon Fair, who is chairman of HCCF, the fundraising arm of HCC?

McVEY: Yes. When Deon and Sam were in town recently, back in April for the weekend emphasis here at ACU, we had them out for breakfast. And, really, it’s the first time I’ve had a chance to sit down with Deon and chat with him. I know him. I know his dad (Ian Fair, former head of the Bible Department at ACU). I am really impressed with Deon. I mean, I’ve always been impressed with Deon’s influence in this work, but I had no idea how really engaged he is in this. I mean, I could see the handiwork. But, this entrepreneurship angle is so significant. I hope you can keep emphasizing that.

Again, I want to say, I’m just a counselor, a friend, and advisor. I don’t hold any position at all. I’m not a fundraiser. But, when they were explaining this necessary change—creation of an accredited college and creation of the Center for Entrepreneurism, Philanthropy, and Ethics—it was then that I said to them, “Here’s what you will be able to do with this. It’s going to position you and platform you in a way that, as an institution, you can continue to serve the church. But at the same time, as an institution, you’ve got a much broader purpose. And I said to them, “Brothers and sisters, if you don’t take that opportunity, God may take it away from you.” 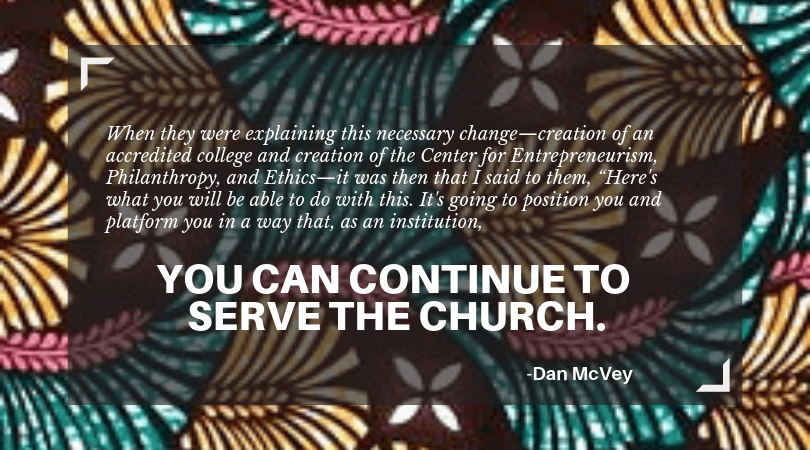 Because, this is a networking, this is a bridging. You’re bridging out to something new and bigger. It’s going to be a little scary, you know, because it’s not ‘our’ normal way [the church of Christ’s normal way] of working. But I’m glad you’re doing this. And, I think it’s very significant.