Heritage Christian College’s President, Dr. Twumasi-Ankrah, was recently featured in an article discussing the future of Africa among other academics and experts.

Dr. Samuel Twumasi-Ankrah, president of Heritage Christian College, shared his views on the mission of the college, as well as his hopes for his students, for Ghana, and even for all of Africa, in remarks published recently by Gateway News, in their article entitled “Africa at the Crossroads.”

That article, which can be accessed here, cites “front-line observers of the turmoil and triumphs of modern Africa,” and explores their views on “which routes lead to progress and uplift, and which lead to regression, repression, and strife.” 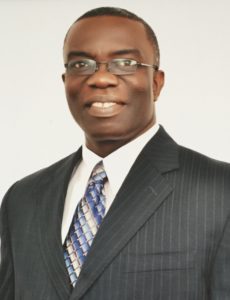 Acknowledging that the continent of Africa confronts myriad challenges—including poverty, hunger, political unrest, cultural clashes, health issues, human rights issues, and corruption—the report goes on to assert that all of these conditions are overlaid with the prospect of the continent seeing a doubling of its population by 2050, little more than a generation away.

“And while relief for some of these problems can possibly come from humanitarian aid, the whole answer, and the lasting answer, must come from Africa itself. Outside interests can lend their support, but ultimately Africa must come to terms with its needs and its future. That’s what’s revealed in conversations with individuals on the front lines of the African struggle. Africa’s own people must rise to the challenges, and they can, with the right kind of help. Some of that help is being homegrown and educated in Africa itself.”

But if there is one bright spot in all of this, it is the hope held forth by education—higher education especially, as the article observed. In the nation of Ghana, higher education is enjoying a flowering as new institutions of learning have sprung up in the nation.

“One particularly innovative institution [there] is Heritage Christian College, which this year launches its Center for Entrepreneurism, Philanthropy, and Ethics (CEPE),” according to Gateway News. “The Center is to be a resource that touches more than just Ghana—its sphere of influence is intended to reach all parts of Africa, and beyond.”

The writer further shared that,

“Twumasi-Ankrah hopes that Christianity’s moral and ethical underpinnings will dovetail with the ‘philanthropy and ethics’ emphasis sought by the college and the CEPE.”

The need is great. Education is on the upswing, but these are challenging times regardless.

Dr. Twumasi-Ankrah was quoted as saying that young Africans are growing up and getting their exposure to the world through the Internet. “Those youths are buying into anything,” Twumasi-Ankrah said. “We are a Christian institution, and here, in certain circles, especially among the young people, one will hear it said, ‘Oh, Christianity is a white man’s religion.’ It is said that the white man brought Christianity here just to take advantage of ‘our ignorance.’ And so that is an area where HCC has a serious role to play—to teach people about the truth of the Bible, and about the truth of Christianity.”

Part of the challenge of educating a new generation of Africans comes in the phenomenon of “brain drain,” wherein many of the best and brightest of Africa’s youth are drawn to scholarships and educational opportunities in the more developed world, and end up living away from the African continent. As Gateway News reported, “Twumasi-Ankrah and his peers are working to overcome that phenomenon by pressing hard for their graduates to give back to their African communities—even requiring their scholarship recipients to do so.” 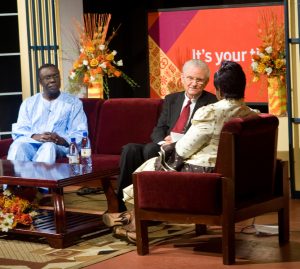 The Practice of Giving Back

Dr. Twumasi-Ankrah has given back himself, simply in the act of establishing HCC, and he hopes to encourage his students to “go and do likewise,” as someone else once said. He has come a long way. At about age 11, he had to leave home because of familial strains within a blended family. “I had to work on farms to support myself. Today, people call it child abuse—child labor.”

Wrote Gateway News: “Swinging a machete, clearing fields, working for paltry pay, he was taken advantage of. When he tried to attend school, he was sometimes sent home because he could not pay the tuition or he couldn’t afford the school uniform. Some days his hunger was so great that he would eat anything he could get his hands on. ‘Fruits, anything—whether “edible” or not.’

The article concludes with these words of Twumasi-Ankrah:

“’I’ve done hunting in the bush. I’m an expert, and I say it proudly.’ He smiled. ‘I’m expert in setting traps to catch all kinds of animals. I can walk through the forest and, just by the smells, tell what kind of animal passed that way. So, life was very rugged for me, from age 12 to 21.’

“But by perseverance, and by exhibiting high intelligence and dedication, Twumasi-Ankrah managed to earn an education that eventually came to include multiple advanced degrees, including a Ph.D. in Higher Education Administration and Leadership.”

And as for HCC?

“’Our work is a church response to a continental need,’ he said simply.”