Dr. Williams Atuilik, Provost of Heritage Christian College, spoke to press about the CEPE and Ghana.

The views of Dr. Williams Atuilik, provost of Heritage Christian College, make for essential reading, and some of which have been chronicled in a recent news report on cultural change in Africa. Dr. Atuilik, who was the driving force behind the college’s newest big development—the Center for Entrepreneurism, Philanthropy, and Ethics (CEPE)—was quoted at length by Gateway News, in their article on “Africa at the Crossroads.” 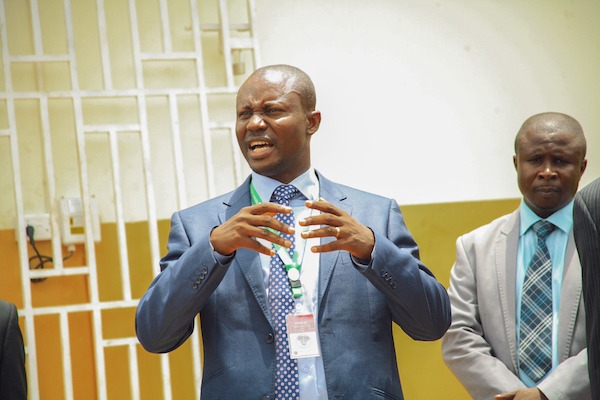 Dr. Williams Atuilik speaks at the dedication ceremony for the Center for Entrepreneurism, Philanthropy, and Ethics, at Heritage Christian College, Accra, Ghana, in March 2018.

That feature, which can be accessed here, addresses the turmoils and triumphs of modern Africa. Through its interviews with top authorities on society, culture, and education in Africa, the article seeks to define “which routes lead to progress and uplift, and which lead to regression, repression, and strife.”

Africa is indeed at a crossroads. Many of the entrenched problems of decades past are still as real and as dehumanizing as ever. Poverty, hunger, political instability, epidemics, human rights violations, and corruption—these and more are part of life on the continent. Yet the continent is not without its bright spots—the nation of Ghana being one—and there are answers and remedies that hold promise.

But answers are most definitely still needed. As the news report states, Africa is faced with the prospect of the continent doubling in population in the next 30 years. That means that job creation will be crucial.

If there is one answer that appears to hold more promise than others, it is the hope held forth by education—higher education especially, as the article observed.

“One particularly innovative institution [there] is Heritage Christian College, which this year launches its Center for Entrepreneurism, Philanthropy, and Ethics (CEPE),” according to Gateway News. “The Center is to be a resource that touches more than just Ghana—its sphere of influence is intended to reach all parts of Africa, and beyond.”

“Here at the CEPE, and at HCC on the whole, our aim is to provide quality training for the next generation of leaders of this country, and for Africa, and possibly for the rest of the world,” Atuilik said in Gateway‘s article. “The college’s president, Samuel Twumasi-Ankrah, and myself, and a lot more people are making many sacrifices to create an environment where we can develop the imaginations of leaders. I see a lot of noble ideas and good intentions coming together to build a brighter future for the next generation.

“HCC wants to do things differently,” Atuilik said. “The first step has been to build a school that is centered on the principles of Christianity. We want students to train within a context of the principles that Christ postulated. That’s something you won’t find in many, many institutions here in Ghana.

“Here at HCC, we’re creating a business incubator that will be the very core of the whole HCC concept. It’s our goal that all our students, regardless of which department they are enrolled in, or whatever program they are following, will end up being entrepreneurs. And as such, they will not have to bother or worry about seeking jobs in the job market, because they will be creating jobs and bringing in others as employees and carrying them along.

“The Center for Entrepreneurship, Philanthropy, and Ethics, which represents the core of everything that we are trying to do here at HCC, sets the school apart from all the universities that I’ve seen here, in this country,” he said.

The “ethics” component of CEPE is especially meaningful to Atuilik.

Gateway News indicated that Atuilik is concerned about ethics—and that he realizes that ethics, or compromised ethics, can impact employment opportunities, community well-being, and an ever-widening arc of societal issues.

“Here in Ghana, and for that matter in Africa, you will often encounter people who compromise their morality, their ethics, for some material gain—even a very small one,” he said in the article. “That is one of the major causes of instability in the region. When you go in the street, you often find young people just idling, having nothing to do—because they don’t have the skills. And so, the devil always finds work for the idle hands, and this condition contributes to regional instability.

“Also, people might accept employment at something they ordinarily would not have done, just because they were pressured by the level of poverty they experience. The level of depravity can be so high—and it is because people do not have the skills to practice more ethical livelihoods. To survive, they give in. We hope to make a difference, helping people to have an alternative, so that they can keep themselves above a level of depravity or desperation.”

Atuilik said that CEPE, and HCC on the whole, is attuned to these problems and wants to make a contribution toward stabilizing Ghana, and the wider world of Africa as well.

In Ghana, where individuals such as Samuel Twumasi-Ankrah and Williams Atuilik are striving to be part of the solution, recent times have been promising. The nation has come a long way. The two men themselves have come a long way.

Atuilik, for his own part, said he came from a very humble beginning, born to parents who never so much as went to elementary school.

“My mother was a petty trader, selling on the streets,” he said. “My father was a laborer. They could not give us much, but they loved us.

“In my early years, I had to learn how to conduct a business. I had to sell on the streets of Ghana—to hawk, basically, in order to make money and go to school. That’s where I learned industry. I took care of cattle—shepherding cattle in the bush. I remember a particular day in my life when I went hungry for three days, because there was no food to eat. On the third day, my hands were shaking.”

Yet Atuilik, like Twumasi-Ankrah, survived, and by dint of personal application, also wrested for himself an education. Like Twumasi-Ankrah, he, too, earned multiple advanced degrees, including a Ph.D. in Accounting. He is a chartered accountant, as well as a barrister at law, tax consultant, chartered banker, and chartered economist. Atuilik’s influence is such that on various occasions he has advised four different presidents of African nations.

He offered a thought that seems to sum up the sentiments he and Twumasi-Ankrah have for their educational quest:

“We will equip our graduates with the necessary tools and resources to go out as ambassadors, starting ventures and bringing people onboard. And this, hopefully, will bring stability. Yes, we do have plans to go beyond Ghana—to affect the rest of Africa.”